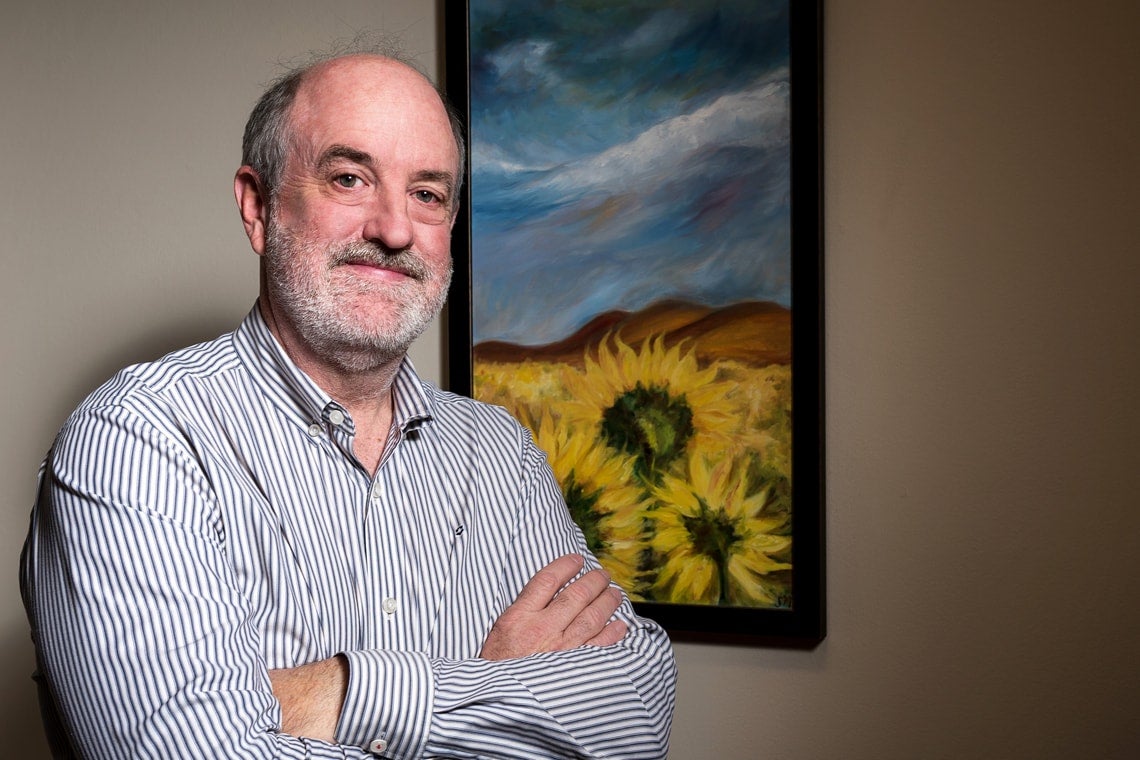 Scott Mabury: “I’m quite proud that we as an institution have adopted the most energy efficiency standards of any universities of which we are aware” (photo by Steve Frost)

As a professor of environmental chemistry, Scott Mabury is one of the most highly cited scholars in his field.

And, as the University of Toronto’s vice-president of university operations and vice-provost, academic operations, Professor Mabury is also one of U of T’s most highly sought decision-makers.

“Under Professor Mabury’s leadership, the University Operations portfolio has executed on an impressive number of initiatives across a wide spectrum of activity,” President Meric Gertler said in a statement. “His mantra has been ‘out-of-the-box thinking with off-the-shelf practicality.’”

•    Creating the Utilities Reduction Revolving Fund, which has seen many divisions save money by reducing energy use

•    Negotiating a 20-per-cent equity stake at MaRS, recruiting JLABS to occupy part of the space and overseeing construction of the new Law building – on schedule and on time.

“Professor Mabury has demonstrated a tremendous capacity to improve the work of the University while at the same time exercising prudent management of our limited resources,” President Gertler said.

Mabury is the only academic in this role at a Canadian university.

And he says it’s the scholarly part of his brain – specifically, chemistry – that helps the administrative side find efficiencies in day-to-day operations at U of T.

“In chemistry, from a scholarship perspective, we think about the architecture of molecules and how the different atoms fitting together will alter their properties,” Mabury said. “To do that, we need to understand how things work, and usually in chemistry, we want to improve the efficiency of a reaction with higher yields.

“So optimizing how things work is a theme that exports out of chemistry into this job. I find it an engaging exercise to optimize how things work with a clear mind to what the overall goal is.”

The overall goal is returning saved dollars to the classroom.

One project that touches every student, and most faculty and administrative staff, is the multi-year Next Generation Student Information Services (NGSIS). For the past six years, Mabury has co-sponsored NGSIS with the Vice-Provost Students.

“This program has dramatically enhanced student experience,” said Robert Cook, the University’s former chief information officer. “Scott drove us to first stabilize the performance of existing services and then introduce dozens of innovations such as the integrated ACORN interface, and tools like Degree Explorer and a Financial Planning Calculator.

“Scott has championed U of T’s collaboration with other universities to explore new ways of doing things and to save costs. His commitment to value has driven NGSIS and everything done across his portfolio.”

Those who work under Mabury are amazed at everything he can get done in a given day.

“He has this magical additional 24 hours that none of us have,” said Elizabeth Cragg, who is the director of the office of the vice-president of university operations. “And he trusts us to do our best job, which is empowering. If he wasn’t a professor, he would have made an amazing preacher.

“You just want to follow him. He’s the Pied Piper.”

Mabury’s work schedule now begins at 7 a.m., to cram in meetings that no longer fit into a schedule that once began at 8. His portfolio oversees 1,650 employees across three campuses, departments that range from food services to IT, facilities, capital projects and campus planning.

Supporting the provost, he helps to put together the University’s annual operating budget and multi-year budget plans.

And his academic life includes regular meetings with graduate students, a graduate-level course he partially teaches and PhD dissertations to review.

On a personal note, he and his Riverdale neighbours recently sponsored a Syrian refugee family who lived in his home for a month.

If that wasn’t enough, he also has a farm 1½ hours east of the city where he goes every weekend to plant seeds, practice no-till farming and get his hands dirty.

“It’s part of the work-life balance,” he said in a recent interview with U of T News. “Lots of brain work here, and then lots of physical work there.”

From his office tucked into a loft-like corner in Simcoe Hall, surrounded by his daughter’s paintings, Mabury talked about his vision and what’s ahead for the University.

“I’m quite proud that we as an institution have adopted the most energy efficiency standards of any universities of which we are aware,” he said. “That was something we did in the spring after the presidential response to the divestment report. It will demonstratively make a difference. We will change how we design and build buildings to make them more energy efficient.”

Sally Garner, executive director of planning and budget at U of T, said Mabury brings a “creative and forward-thinking approach” to the budget process.

“He has contributed enormously to the University’s ability to grapple with the many financial challenges currently being faced by all public universities,” Garner said. “He has a particular ability to strategically connect the academic and financial dots and to articulate critical budget messages to the broader University community.

“Rarely a week goes by when Professor Mabury doesn’t bring a new idea to the table.”

For the future, Mabury will be focused on development of the University’s real estate. At Spadina Avenue and Bloor Street, U of T is exploring developing retail, office, residential and academic space. In the Huron Sussex community to the west of Robarts Library, the University is working with its neighbours and planning residences for undergrads, grads and townhouses – hoping to contribute to affordable housing in the city.

“We’re going to build 10 to 12 faculty townhouses there because we hear the challenges of deans and recruiting faculty,” he said. “New faculty would love to be close to where they’re kick-starting their careers.”

Mabury hopes by developing real estate assets, the University can produce annual revenues that match the endowment payout of about $60 million – money that would be channelled back to the classroom.

Perhaps one of the most prominent initiatives Mabury will spearhead – one that will touch many Torontonians – will be the transformation of U of T’s downtown Toronto campus,

“The most important project that we’re involved with is pedestrianizing the historic core and returning it to people as opposed to cars,” Mabury said. “Our heritage assets that you see – Convocation Hall, Hart House, the grand stately University College and Croft Chapter House – the view and connection with those buildings for faculty, staff and students is obstructed by cars and roads.

“We want to remove that obstruction and prioritize pedestrians and bicyclists.”

Copyright © 2021 Vice-President Operations and Real Estate Partnerships, U of T. All rights reserved.